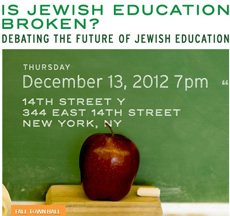 "Is Jewish Education Broken?" is the title of a panel debate being held in New York in two weeks. It looks like it will be a really interesting and valuable evening. Sadly I will not be able to attend. I would like to recommend that you do if you are available. Details are below.

My friend and colleague, Rabbi Gary Greene saw the session title and took issue with it. He said "...knowing what so many colleagues are doing to improve Jewish Education, I have come dislike rhetorical titles like 'Is Jewish Education Broken?' It's like asking 'Do you still beat your wife?'  I find that title self-defeating prophecy to which the answer has to be yes...Why not focus on the exciting innovations going on in Jewish Education?  ...I think a better title could be "How might we meet the challenges of Jewish Education today?"

You go, Gary. Amen Selah. I agree. Now go to the session if you can!

For Jewish Schools at a Free Event on December 13


NEW YORK, N.Y. … “Is Jewish Education Broken?,” debates new visions for liberal Jewish schools in the 21st century. This free event takes place on Thursday, December 13 at 7pm and is hosted by the 14th Street Y. “Is Jewish Education Broken?” is presented by Speakers’ Lab, a new public programming initiative of the Posen Foundation, with Tablet Magazine and The New School for Public Engagement, Jewish Cultural Studies Program.

This is Speakers’ Lab’s second program. The next public program will take place in the Spring of 2013.

Admission to “Is Jewish Education Broken?” is free. Seating is limited and pre-registration is encouraged. Sign-up at www.speakerslab.org or by calling 212-564-6711 x 305.

Event and Venue Info:
The Theater at the 14th Street Y

Posen Foundation (posenfoundation.org)
The Posen Foundation’s mission is rooted in the belief that Jewish education can make a meaningful difference in Jewish life and should be available to all who are interested. To this end, the Foundation works internationally to promote Jewish learning, support academic research in Jewish history and culture, and encourage participation in Jewish cultural life.

As part of this effort, in 2012 the Posen Foundation launched its new public programming initiative, Speakers’ Lab (www.speakerslab.org), which is dedicated to exploring new perspectives on Jewish culture and identity. Based in New York City, Speakers’ Lab presents debates, arts performances, and panel discussions in collaboration with other organizations and venues. In 2012, Speakers’ Lab is presenting two events, one in the spring and one in the fall.

The New School (newschool.edu)
The New School is a legendary, progressive university comprising seven schools bound by a common, unusual intent: to prepare and inspire its more than 10,500 undergraduate and graduate students to bring actual, positive change to the world. From its Greenwich Village campus, The New School launches economists and actors, fashion designers and urban planners, dancers and anthropologists, orchestra conductors, filmmakers, political scientists, organizational experts, jazz musicians, scholars, psychologists, historians, journalists, and above all, world citizens-individuals whose ideas and innovations forge new paths of progress in the arts, design, humanities, public policy, and the social sciences. In addition to its 92 graduate and undergraduate degree-granting programs, the university offers certificate programs and more than 650 continuing education courses to 5,619 adult learners every year.