Can extremism ever be Kosher? 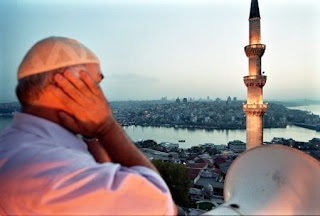 Rabbi Marc Rosenstein writes the Galilee Diary in the Union for Reform Judaism's 10 Minutes of Torah e-mail and blog. Today's struck me as particularly worthy of sharing and inviting your commentary. He references a bill put before the Knesset by MK Anastassia Michaeli of the Yisrael Beiteinu party. This bill seeks to make illegal the sound of the Muezzin's call to worship for Muslims. Again, I am concerned about the extremes to which some people believe we can go in our intolerance. I will not be blogging on the Haredi riots over the arrest of some in their community for collecting tzedakah money for fraudulent causes. We need to be a light to the nations, not another example of extremists perverting their own belief system. But read what Marc has to say. And weigh in.


...With the realization that our brothers are capable, in their moral qualities, of relating in this way to the members of another people and of crudely desecrating their holy places, I am forced to wonder, if the situation is like this now, what will be our relationship to others when we finally do achieve ruling power in the land of Israel. If this is the Messiah, then "let him come but let me not see him."
-Ahad Ha'am, in a letter on news from Palestine, 1913.

Typically, a village mosque has two religious functionaries, an imam, who leads prayer, preaches, teaches, and provides pastoral care and communal leadership - and the muezzin, a sort of combination of cantor and shammes, who deals with the day-to-day administration and upkeep of the mosque.  The major function of the muezzin is to call the public to prayer, five times a day, from the tower of the mosque (and to relay other important communications as they come up, most commonly death announcements).

In Israel, both of these functionaries are government employees, like [Orthodox] rabbis.  In many villages, one or both are part-time positions, and I know imams who also work as gym teachers, auto mechanics, etc.  I think that most muezzins are autodidacts; most imams receive some kind of professional training - at seminaries in Jerusalem or Jordan or Egypt; some, as in the Orthodox community, are privately ordained by a local teacher.  The division of religious affairs in the ministry of the interior, which is responsible for non-Jewish religious services, provides in-service courses and occasional seminars and enrichment programs for imams and muezzins.

The reason that mosques have minarets is to provide a high platform for the muezzin to chant the call to prayer so that it will be heard far and wide; indeed, traditionally, the municipal boundaries of a village were considered to be defined by the area in which the muezzin could be heard.  Today there are loudspeakers mounted on the minarets, and the muezzin chants from downstairs - and can be heard over a much wider radius than in former, unplugged, times (in answer to one FAQ, by the way, the chanting is still live, not recorded).

The advent of electronic amplification has led, it seems to me, to a diminution in quality of life for village residents.  Often I have been visiting near a mosque - in a school, on the street, in a living room - when it was time for the call to prayer, and been frustrated and annoyed by the blast of sound that makes conversation impossible for several minutes (think of a low-flying jet).  And for the locals, this happens every day, five times.  I wonder if this nuisance is seen as a result of incompetence, a manifestation of religious assertiveness, or simply a fact of nature/culture that is taken for granted.

Our home in Shorashim is on a hillside overlooking the Hilazon valley; it is about a mile across the valley as the crow flies, from our bedroom window to the minaret of the mosque in the village of Shaab.  When we first arrived, we were very conscious of the muezzin's call, especially the one that comes between 4:00 and 5:00 am.  However, it didn't take long for us to tune it out; if I happen to be awake at the time of the morning call, I notice it, but I don't think it has actually awakened me in many years.  Indeed, I find the plaintive chant pleasing.  And while my Arabic is rudimentary, I can identify a funeral announcement and generally even make out the name of the deceased.

Not all our neighbors are as laid-back about this as we are, and one hears complaints about "noise pollution" and the disturbance to sleep caused by the muezzin's call.  Now, a number of them are enthusiastic about a bill proposed by a member of Knesset to enforce decibel limits on the loudspeakers of houses of prayer.  Needless to say the bill was not submitted by Arab parliamentarians concerned about quality of life in their villages, but by Jewish lawmakers seeking to protect Jews from Muslim noise pollution.

All those centuries we had to suffer from the wailing of the muezzin - or the cacophony of the church bells every hour; finally we have our own state so we can shut them up.  Somehow I don't think that this is what Herzl (or Achad Ha'am) had in mind.
Posted by Ira J. Wise at 7:06 PM 0 comments
Links to this post

Teaching Israel, Warts and All

Friend and colleague Peter Eckstein posted this in the Jewish Educational Change Network before new year's. I think it tells an important story. I invite your thoughts on how we can do a better job bringing Israel to our students and our students to Israel.

I have the good fortune to be working with a nationally based group of educators and teens associated with the iCenter’s MZ Teen Israel Internship. The purpose of this program is to follow up on teens’ Israel summer experiences, through a framework consisting of a series of yearlong educational and social activities. The young people meet with mentors and educators to collaborate on Israel oriented projects, and to study. As “the teacher”, I meet with a small group of high school students, usually in a coffee shop, and together we learn about the reality of modern Israel. We’ve focused on how being a Jew in America relates to being a Jew in Israel. We have explored the diversity that makes up Israeli society, comparing it to the multi-faceted nature of North American Judaism. We’ve thought about Israel being characterized by the people, not just the stones or the conflict. In the future, we will be discussing the role of religion in Israel, as well as the dynamic that exists between Israeli Jews and Arabs. We are trying to make real connections with the Jewish State, drawing from the teens’ experiences in the context of a more in-depth exploration of Israeli society. All of these elements are meant to get these teens to think seriously about how Israel relates to their lives, and how they can educate their peers about the real Israel, by getting past the headlines and beyond the myths.


This is all about education, not advocacy. Back in September, I attended an inaugural conference that kicked off this program. It was attended by almost 40 teens and about a dozen educators. In conversations I had with teens and my colleagues, I was struck by how important it was to the teens to have the “right answers” to defend Israel. Many of them had difficulty understanding the difference between knowing about Israel - being educated about the land and the people; and defending it against its detractors. As we educators in the program develop the curriculum, we struggle with how the tensions that exist in Israel can in fact be tools to foster deeper engagement with Israel and the Zionist enterprise.


In the past week, as we collaborated on developing future sessions for the teens, we have been working on how to teach the significance of the recent “price-tag” attacks that have occurred in Israel and in The Territories. Can the phenomenon of the “Hilltop Youth” provide a nuanced view of the intersection between the role of politics and religion in the life of The State? How can the extremes reflected by current events help us gain a better understanding of what Israel is all about, and what its promise and potential can be? I am not talking about whitewashing a situation. I am talking about understanding it so that it can become a tool for engagement.


In my mind, at least, the political, cultural, economic and ethnic tensions that characterize life in Israel are a mere reflection of Jewish history, both in Israel and in Exile. We have always been one people, but with many voices. This idea of Jewish diversity can be used as a tool to help our young people understand that being Israel is all about struggle. We should provide the tools to our teens, to empower them to joyfully enter into the fray that is the Jewish conversation about Israel. When we teach Israel, we mustn’t ignore the warts.
Posted by Ira J. Wise at 10:38 PM 1 comments
Labels: Israel, Israel Education, Peter Eckstein, teens Links to this post