I am in a very strange place and time right now. It is Thursday, December 31 at 7:00 p.m. I am in Ben Gurion Airport in Tel Aviv, waiting to board a plane scheduled to depart at 11:40 p.m. I will literally be in the air for the arrival of the New Year as it is welcomed from Jerusalem to somewhere in the Pacific. I am really missing the start of 2010. As my friend Leslie Coff's son would say: "Epic Fail."

The metaphors are almost overwhelming - at least as I sit alone in a airport with my cafe hafuch (gadol, chazak v'im dal shuman) - at the gateway to Eretz Yisrael. So please excuse a little sleep-deprived maudlin musing on the eve of the new year...

I am in the air between two realities, two homes. Audrey and I have had more serious conversations about the place Israel holds in our hearts and lives than at any 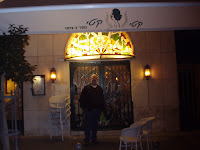 time since the year we lived here. We celebrated our first wedding anniversary (that's me in front of the new Katy's - the new iteration of the restaurant where we celebrated that anniversary) in Jerusalem, during my first year of graduate school. It was an amazing time, even though Israel was in the second year of the first intifada. (Looking back, it was the mildest of conflicts in the last two decades, but it did not seem so at the time.)

The old arab-built house at the corner of Oliphant and Alcalay was were we became a family. Living on our own, far from either of our families or friends, we found a new way together. By the time we returned to the states (and headed out to the frontiers of Los Angeles) we had established our own rhythm as married people tend to do. We had gone from being you and me to being us. The smell of the jasmine bush in front of our Jerusalem home is still one of the strongest and most meaningful olfactory memories I have - right up there with Grandma Honey's latkes and Mom's London Broil (among many other choice dishes). I walked over to the old house after Shabbat last week - the hotel (Prima Royale, restored and very nice) is only three short blocks away - and picked some flowering Jasmine from the massive bush to bring home to Audrey (this is the fourth time I have brought some back).

Last spring, our oldest son spent a semester at Kibbutz Tzuba, outside Jerusalem with the Eisendrath International Exchange. It was some of the best money we ever spent. He had an amazing time, and we were just waiting for him to say "Let's go." I think we might have. He did come back committed and in love with Israel, but like us not ready pull the ripcord. He did write about it for his Confirmation last June.

Another up in the air aspect is New Year's Eve. In Israel it is referred to as Sylvester. For many years it was a non-issue in Israel, except in places where the rabbinate threatened (and followed through) to remove the Kashrut certification of any restaurant or hotel that held a Sylvester celebration. The Balashon blog explains why. In Tel Aviv tonight there are lots of events in restaurants that do not have Kosher certification. And I am told that Rabin Square is set up for several bands to perform. But it is not a big deal here. At all.

As I sit in the airport (boarding soon) with my Jim Joseph Fellowship friends, Harper and Audrey are getting ready to go to our friends' house. For the last ten years or so, we have spent New Year's eve with two other families, starting with dinner, and continuing through dinner on New Year's Day, when we celebrate Ethan's birthday. New Year's Rockin' Eve, chocolate martinis, board games, videos, lots of cooking and hanging out. It is fabulous. I am sad to miss it tonight. It is a seriously meaningful celebration for our families, although not celebrated with seiousness. It is strange not to be there.

So this rambles a bit. That happens when you are up in the air. I was excited to come to Israel eleven days ago. I was sad to leave my family. I am excited to go home and be with them in the morning. I am sad to leave Israel. Unlike every other time I have left Israel, I already know when I am coming back, as the fellowship returns to Bar Ilan next December.

My heart is in the east, and I in the uttermost west--
How can I find savor in food? How shall it be sweet to me?
How shall I render my vows and my bonds, while yet
Zion lieth beneath the fetter of Edom, and I in Arab chains?
A light thing would it seem to me to leave all the good things of Spain --
Seeing how precious in mine eyes to behold the dust of the desolate sanctuary.