My friend Josh Mason-Barkin is at it again. His ideas on how to move forward with Rabbi Yoffie's call for using technology as a tool to take synagogues to the next level was published by Jew Point 0 - a fabulous blog on Jewish life and technology, by Darim Online. 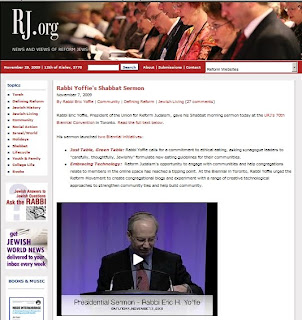 As far as Rabbi Eric Yoffie is concerned, Reform congregations need to get with the program, technologically speaking, and they need to do so now. At the recent URJ Biennial in Toronto, the movement’s head delivered his annual sermon and used the opportunity to encourage every congregation to think seriously about harnessing the power of the internet to enhance their communities:

"[T]he web – potentially at least – empowers our members and democratizes our synagogues. The synagogue is the grassroots address of the Jewish world, and the web gives us an instrument to involve and include Jews as never before. Are our synagogues doing great things in this area? Absolutely. Are we making the most of this potential? Not even close."

Yoffie’s challenge to congregations is to be applauded. Too many synagogues and Jewish schools have an attitude towards tech that’s generations (a relative term, I know) behind their congregants and students who all have Facebook accounts, use Twitter, and are never more than an arm’s length from their Blackberries and iPhones. But the movement’s approach to addressing this issue — an organized program to train lay leaders to create and maintain congregational blogs — is only a first step. The Reform movement has an incredible opportunity on its hands, a chance to take the next steps and to get a lot more serious about using technology to build and strengthen communities.

Four suggestions for maximizing this moment:

Let’s be clear: The Reform movement is taking unprecedented steps forward. Rabbi Yoffie’s sermon and the related URJ initiatives launched this week mark the first time a major movement is encouraging and supporting member congregations to take this trend seriously. This is an important moment, and it would be a shame to waste it.

Josh Mason-Barkin, director of school services at Torah Aura Productions, is a member of a Reform congregation and a graduate of HUC-JIR. He blogs at tapbb.com. You can find his twitter feed at www.twitter.com/barkinj. He frequently contributes to a conversation about Jewish Education in the 21st century on Twitter under the hashtag #jed21
Posted by Ira J. Wise at 1:15 PM
Labels: biennial, blogs, Josh, Mason-Barkin, reform, support, technology, Toronto, URJ, Yoffie