Playing the Game By New Rules

This is the last of four articles I wrote for Eilu v'Eilu, a weekly debate published by the Union for Reform Judaism last month. It was written for a Reform audience, but you can transliterate to Conservative, Zionist, Renewal, Reconstructionist, Orthodox, or whatever works for you! You can subscribe to Eilu v'Eilu (and see the other articles on the role of the Jewish educator by me and Larry Kohn, look for volume 41) by going to http://urj.org/learning/torah/ten/eilu/.

In the May 11th issue of the New Yorker, Malcolm Gladwell discussed How David Beats Goliath. He described a basketball team of twelve-year-old girls who were not that tall, and most of whom were beginners. Yet they came within a game or two of winning the national championship for their age group. Like Lawrence of Arabia, they won by not playing the game the way others expected them to do. Just as the biblical David approached Goliath without sword, spear or armor. Lawrence’s forces, the twelve-year-olds and David approached their opponent by playing to their own strengths, what they were able to do successfully. David couldn’t win a contest of brute strength with his inferior bronze sword against the giant Goliath’s iron blade. Check out Samuel I and Gladwell’s article. They both make for great reading and learning. 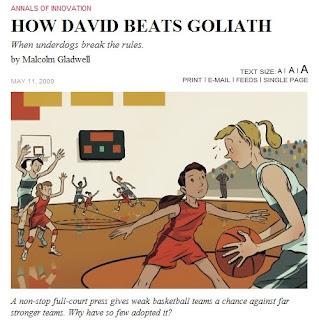 AS Jewish educators, we need to work with our teachers, madrikhim, clergy, lay leaders, parents and students to break the rules in the same way. Some smart people have been writing the obituary of the synagogue school for some time. I believe that the majority of Jewish children are getting their formal Jewish education in our schools because it is a model that can and often does work well for them, not because their parents are looking for the path of least resistance. By each of or institutions (not just the school, but the entire synagogue) examining what we are able to do most successfully, we can change the game in ways that produce spectacular results, just like those young basketball players did. And we can learn from each other, from one professional to another, from synagogue to another, and so on. I can recommend Schools That Work: What We Can Learn From Good Jewish Supplementary Schools, by Jack Wertheimer.

Changing the game means figuring out what we do well. It also means adapting to a changing educational environments. Our learners are digital natives. Our success will depend in part on how we as educators become digital immigrants. And here the Israel experience is instructive. When someone makes aliya (emigrates to Israel), they go through a process of klitah – absorption. Some Olim make a thorough klitah: they work hard to learn Hebrew, with a proper Israeli accent, they try to fit in to the patterns of Israeli life and work and basically live like Sabras as much as possible. Klitah for others is not so much being absorbed and enculturated as it is transplanting the reality they came from into a new place. That easily leads to cultural conflicts: Why can’t they do things the right way over here? We need to work hard at our digital klitah in order to remain relevant to our learners. And we need to continue to understand where they are in other ways as well: emotionally, culturally, intellectually, etc.

In Pirkei Avot, Rabbi ben Bag Bag tells us to turn Torah over and over because everything is in it. He was telling us to help each new generation make meaning for themselves of Torah. And that means turning it ways that are meaningful to them. I just returned from two weeks on faculty at Camp Eisner, one of our URJ camps. I marveled each day as I watched young adults turn Torah over and over with their campers. Not just in the Limud sessions, where we focus specifically on Jewish learning, but in the bunks at night, in the pool, on the ball field and lazing in the shade on Olim hill. They keep it real and right in front of our kids. No technology. Just teens and twentySomethings being living examples of Being Torah. My wife and I send our kids to camp. We have twelve URJ camps. If you have kids, you should too.

I want to thank my colleague Larry Kohn for once again being my teacher, and Rabbi Joan Farber and the URJ Department of Lifelong Learning for creating this forum. I often tell my students that the only bad questions are the ones we don’t ask. I also want to thank all of my teachers, from my first Sunday school teacher Sharon Steinhorn (2nd grade) to those I work with today at B’nai Israel in Bridgeport Connecticut and the Leadership Institute for Congregational School Educators in New York.
Posted by Ira J. Wise at 8:39 PM 1 comments
Labels: David and Goliath, Eilu v"Eilu, engagement, Gladwell, Jewish learning, New Rules, Professional Development, Sharon Steinhorn, synagogue, Teachers, URJ, Visionary Links to this post