Are Bayit Sheini (second Temple) Days Here Again? I Hope Not, For All Our Sakes

Rabbi Stanley M. Davids is Rabbi Emeritus, Temple Emanu-el in Atlanta, GA, and has served as president of the Association of Reform Zionists of America (ARZA-World Union). He now lives in Jerusalem. He shared this letter with Ethan Prosnit, a first year rabbinic student at HUC in Jerusalem and an alum of my synagogue and the staff of Camp Eisner. I work with his father, Jim, who is my rabbi. It is reprinted with Rabbi Davids' permission.

I have no fear of crowds and I am no stranger to demonstrations. I have been involved in organizing and participating in mass protests since the mid-1960’s, and have even had the privilege of being arrested outside of the Russian consulate in New York in 1986 during a particularly contentious struggle. The causes have varied – from demanding the rights of African Americans to be able to buy houses in previously segregated neighborhoods, to demanding the right of Soviet Jews to emigrate, to demanding an end to American military involvement in Vietnam – and most recently to demanding protection for the civil and political rights of gays and lesbians here in Israel.

I picketed Soviet cultural events in the United States in the 1960’s and ‘70’s (even though I knew the Bolshoi to be irresistibly glorious), and I once found myself part of a massive anti-Vietnam protest in front of the Washington Monument. At the time, I was in my US Army uniform, since I had no civilian clothes that fit – and thus found myself being reprimanded by the two star general who commanded Fort Belvoir. A memorable occasion.

But I have been staying away from the demonstrations being conducted in Jerusalem every Shabbat afternoon for the past six weeks. Based upon the local and international news reports, I just did not want to have to confront my own deep-seated emotions; I just didn’t want to have to acknowledge that my responses to the demonstrations would be far from sanguine, far from objective.

As with any political theater, the current demonstrations have multiple layers of causation. Ostensibly, the Haredim (ultra-Orthodox Jews who, in this case, are an anti-Zionist segment of the Haredi community living in Meah Shearim) are protesting the decision of Jerusalem Mayor Nir Barkat to permit a private parking lot near the Jaffa Gate (leading directly into the Old City and thus to the Kotel, the Western Wall) to be open on Shabbat. The parking lot serves large numbers of tourists, Jewish and non-Jewish, Israeli and foreign, who come to the Old City on Saturday to shop and to experience sites that are sacred to Judaism, Christianity and Islam. These Haredim do not live close to the parking lot, but view the opening of the parking lot as a violation of their view as to the sacred nature of both Shabbat and Jerusalem itself.

For those managing the demonstrations, there is another significant layer of causation: these Haredim lost out in the campaign that led to Mayor Barkat’s election. Barkat was supported by many of us who were deeply troubled by what has been called the Haredification of Jerusalem. But Barkat might not have won had not the various Haredi communities become entangled in a nasty internal power struggle. That split opened the door for Barkat —and the protesting Haredim are members of a dissident group that now needs to prove its street-creds by capturing public attention.

The third level of causation is that the current demonstrations are part of an overt and potentially explosive battle for the very soul of Jerusalem and for the soul of the State of Israel itself.

Israelis have not yet been able to successfully define for broad acceptance the full meaning of what is involved in declaring Israel to be a just, pluralistic, democratic Jewish state. There is not yet internal consensus about how Israel’s democratic structure can be fully guaranteed while its Jewish identity is granted similar protection. How will Israel’s Arab minority (Muslim and Christian) be guaranteed full and equal treatment? How will non-Orthodox Jewish communities be able to conduct life cycle ceremonies for their members free of government sanctioned coercion? How will the state guarantee the full expression of Jewish multiplicity and diversity?

In the most recent national election, Avigdor Lieberman’s party (Lieberman is now Israel’s Foreign Minister) campaigned on behalf of a loyalty oath which, if ever it would be approved by the Knesset, could severely restrict the civil rights of many non-Jewish and even some Jewish Israeli citizens. The battle being waged by our Progressive Movement and Israel Religious Action Center for the right of Reform Rabbi Miri Gold to receive the same legal status as Israel’s other district rabbis (who just happen to all be Orthodox men) is part of that same struggle for Israel’s Jewish soul. And there are many, many other examples.

But this Shabbat I was invited by several of our HUC rabbinic students to accompany them to the demonstration. At the very least, I could provide a bit of context for them – and could translate what was being screamed out. So I set my hesitancies aside.

We were across from the parking garage, facing the magnificent new Mamilla shopping mall and the Jaffa Gate. Behind us was the architecturally powerful shape of the central campus of the Hebrew Union College and the main offices of the World Union for Progressive Judaism. By 5:45 pm, milling crowds of Haredim had clustered above and behind the garage, rhythmically chanting SHABBAS, SHABBAS. The police were there in full battle gear, including some in body armor. Tourists stopped to try to understand what the tension was all about. News photographers were present in large numbers. The day was still quite warm. Signs were up everywhere inviting people to come to the International Arts and Crafts Fair that has been drawing overflowing crowds.

More voices joined in the chant. Haredim were coming slowly into the area from all directions. Horse mounted patrolmen took up their positions. And then there was a sound quite like that of a rapidly swelling river. Hundreds of Haredi men were moving down the street from Meah Shearim. The chants became shouts, and the atmosphere became super-charged with tension. The first skirmishes started as the police tried to keep the Haredim on the sidewalks and away from the garage, but the human surge could not easily be contained.

The men on horseback were singularly effective, moving directly into the crowds, slowly, steadily pushing them back. Now there were shrieks of outrage, along with SHABBAS, SHABBAS. Large numbers of non-Haredi Israelis, men and women, were watching – and then suddenly they found the demonstrators pushed into their midst. Screaming matches broke out in scattered pockets. Anger vs. anger; indignation vs. indignation; passion matched with passion. 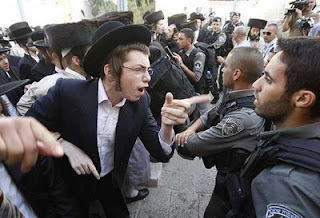 The shouted claims were accompanied by waving hands, pointing fingers and shaking fists. The demonstrators were told that they were a shame to Israel, an embarrassment to the Jewish people, the cause of a potential civil war that would damage Israel more than its Arab enemies could do. The by-standers were told that they should know that the essence of Torah is at stake, that the demonstrators were ready to die to protect the holiness of God’s name, that this was OUR city and in this city Torah law IS the law.

The demonstrators surged against the police and the police pushed back first with restraint – but then at times with grim determination. Some demonstrators were carried kicking and screaming to vehicles that clearly were marked as belonging to the Jerusalem jail system. The crowds cheered those who were carried off as heroes of the day, as martyrs to the cause.

I moved close to where the police and the demonstrators were in direct contact with each other. I heard the words that I feared and dreaded. These demonstrators, resplendent in their garments of 17th century Poland, opposed in every way to the Zionist state, screamed NAZI, NAZI into the faces of the young Israeli policemen. Not once; not just from a few people – that disgusting and utterly inexcusable slander, that ugly blot on the memory of the 6 million, was ringing out from various pockets of demonstrators.

I stood two feet in front of an Ethiopian policeman who probably was no more than 18. I heard the fur-hatted demonstrator scream at him: You are only an Ethiopian. You are not even a Jew. You are worse than a Goy..

My mouth filled with bile. I knew that I was trembling with impotent rage. When the surge ended, I went over to the young soldier and shook his hand and thanked him for the manner in which he had handled this unspeakable assault. He smiled sadly and just said: We should just all stay healthy.

I stayed for two hours. During quiet moments I tried, but I know that I did not succeed, to help the HUC students answer the questions which were inescapable for them: What is going on here? Who are these people and what can be done to protect Israel’s future from them? Our discussions will be lengthy, and they could not be carried out on a sidewalk crowded with sweat and faith and fury this Shabbat afternoon in Jerusalem.

As I walked home, trying to let the beauty of the city heal my wounds, I just kept telling myself over and over again: Israel desperately needs the full involvement, the full presence, the full participation, the full support of Western democratic liberal Jews so as to preserve, defend and protect the dream that is at the very heart of Israel’s existence. The Reform Movement, guided and inspired by the work of ARZA and its partners, must see the battle for Israel’s soul as a critical part of the battle for our people’s future. We need our international leaders to weigh in on this struggle even as they weigh in on matters of Israel’s security and defense needs. We need our young people to realize that their presence here could actually make the difference, could actually determine the outcome, of what is nothing less than a culture war.

How do we share that message? How do we act upon our conviction that the future of Israel deeply matters to us? How do we keep faith with our commitment to Tikkun Olam in our ancient and modern homeland? How will our own children and grandchildren judge our responses to the rising tide of faith and fury? And how do we explain all of this to our first year rabbinic and cantorial and education students as they prepare for their roles as spiritual leaders of our people?