“Guys, this is a learned Jew kind of thing to know.” 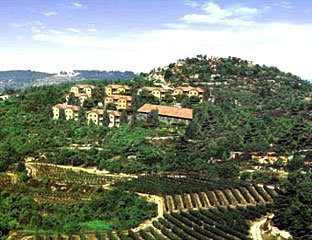 Here is a guest posting from my son Ethan. He is 16. He spent the past semester in Israel on NFTY's EIE program - learning, touring, hanging out and earning ful academic credit for high school. This was the semonette he wrote for Confirmation, which took place a week after he returned. He presents us with the real challenge of seeking the Next Level in Jewish learning. EIE was one of the best investments we have ever made!

Kibbutz Tzuba in the Judaean Hills
As a little kid at Hebrew school on Sunday mornings, learning about Israel is like learning about some magical mystical land. It seems almost unreal, and at that point, I couldn’t even imagine leaving home to go somewhere that was so immensely far away. But, having just come back from that far, far away place, I can say that some of the things that I thought as a second grader in Mrs. Silkoff’s class couldn’t be truer.
I remember being awed by the things that I would hear about Israel when I was a little kid, and having been seeing those things for the past four months and six days, I know now that there was no exaggeration. It seemed to me that everything I saw in Jerusalem or Tel-Aviv or Haifa or Tsfat or anywhere else that we went was more incredible and more amazing than the thing I saw before it. But, there was more to this trip than mere sightseeing.
This past semester, kind of like Confirmation, has been a sort of rite of passage for me. In Israel I learned more about myself, my people, and my homeland than I have in my entire life. And, as confirmation marks the continuation of my Jewish learning as I continue to grow, EIE also demonstrated for me the importance of Jewish education past the whole bar-mitzvah extravaganza.
My Jewish history teacher in Israel, Shira, after giving us a piece of information would all the time say, “Guys, this is a learned Jew kind of thing to know.” And, while some of those “learned Jew” pieces of information I already knew from Hebrew school, or bible stories from my dad, others of those “learned Jew” things were new, slightly more complicated.
Confirmation is also a kind of measure of growth in the sense that we are choosing to commit to Judaism as people who are old enough to make an informed decision. Likewise, some of the things that I learned in Israel, such as politics, or certain intricacies of the Israeli-Palestinian conflict, or even environmental issues, I was only able to fully understand because I was old enough to.
This semester, I learned that Israel isn’t always pretty. I worked for a day at an underfunded, underdeveloped preschool in Jerusalem. I rafted with my friends through what little is left of the Jordan River, and I even visited an army outpost on the Lebanese border where I had to stay behind ten-foot-thick concrete walls. But, for everything that I saw that was sad or unpleasant, I saw a million things that were spectacular, unbelievable, and beautiful beyond belief.
I walked above the Bahai Gardens in Haifa, and I shopped at a shook that went on forever just next to Shenkin Street in Tel-Aviv. I got to walk through the old city, and stand at the Kotel, and every morning, when I would look out my window on Kibbutz Tzuba, I would see the most unbelievable view of the kibbutz’s vineyards flowing down a slope until they became the sprawling Judean Hills.
So, that Israel that I imagined from inside room 7 just upstairs really does exist to some extent. Israel is as magical, mystical, and every bit as heart-wrenchingly beautiful as I always though it would be. But, because of this semester abroad being such a time of growth and learning, I also realized that it is a complicated, modern, and difficult place as well.
And to me, Confirmation is the point in time at which I can say with authority, “Ok, I know about the history of our people, I know about the issues that we and our homeland face, and I know about the importance of Judaism in my life. Now what? I’m ready to keep going from here, so what can you teach me next?”
Posted by Ira J. Wise at 12:38 AM
Labels: engagement, essential learning, Ethan Wise, Israel, Jewish learning, Learned Jew Thing, NFTY EIE, Visionary