What do we really think about a Jewish State?

This is a post from THE HOT TOPIC - a regular blog on the Haaretz web site and co-produced by Makom. (Find them at http://makom.haaretz.com/topic.asp?rId=135) Robbie Gringrass, an outstanding educator and performance artist living in Israel posted it to his Facebook page. It borders on heresy, yet it asks a question each generation must wrestle with.

What do we really think about a Jewish State?

The time has come. When even arch-enemies such as Gideon Levy see in Netanyahu’s speech reasons to be cheerful, we may presume that Netanyahu has hit on something approaching Israeli consensus.

Among many other statements, contradictory or vague as they may have been, one of Netanyahu’s messages came clear. Those who call for two States for two Peoples must declare
their acceptance of both halves of the statement: a Palestinian State for the Palestinian People, and a Jewish State for the Jewish People.

The Arab and Palestinian leadership could not have been sharper in their response: a Jewish State is out of the question. In s 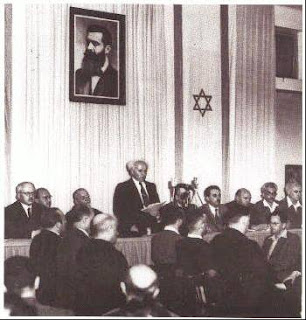 o doing, they would seem to be only confirming Bibi’s essential narrative: That the Arab world has never wanted to make peace with a State for the Jews in the Middle East.

Before we go to town excoriating ‘Arab rejectionism’, or chastising Netanyahu for 'destroying the Peace Process', it is time to turn our gaze inwards. Do we Jews accept the idea of a Jewish State? Do we accept that like the French and Greeks, Norwegians and Turks, we Jews are allowed a nation state? Or do we feel that ethnic nation states are racist? (In which case we probably reject the idea of a Palestinian State, too.)

Or do we refute the key Zionist proposition, and insist that the Jews are a religion, a culture, and should not be defined as a nation at all?

Is a Jewish State an un-Jewish idea?

I don't think so. I think we a faith tradition. I also think we are much more. We are a people and a nation. This flies in the face of what we were taught as kids, as our parents generation tried to melt into the melting pot of America. Like every other ethnic group maintaining ties to their culture and homeland, we need to see ourselves as mart of the American mosaic - one variety in the tossed salad of American life.

Similarly, I think the Zionist endeavor (no longer an experiment, over 100 years after Herzl and 61 years after independance) is still a very Jewish idea, even if at times throughout its history political leaders may have made decisions at odds with Jewish values. It is a Jewish state, made up of flawed humans, not a Jewish utopia filled with tzadikim who who always make the right choices. And each of those humans brings his or her own interpretation to the table. I have a boyhood friend living in Ma'ale Adumim. We see the map differently. Time may tell us who is correct, but we both believe we are approaching the idea of the Jewish state from a place of integrity.

What is the difference between a Jewish state and a racist ethnic state? No matter how I might want to be a Greek or an Italian or a Somali, I cannot. Those are identifications that depend upon genetics. I could marry in, but I would not be able to become authentically a part of those groups. While for most of our history Jews have not actively sought converts, they have always been welcome once they completed the process. Their children are our children.

I hope the day comes in our time that Israel is able to be the best it always promised it could be without compromising security for all. I hope its leaders can find a path to peace with integrity. Smearing Israel with the label of racist is both facile and cynical, and at it its core a lie.

The deeper question is for my friends living here in the Diaspora with me. We need to get over our ambivalence and weigh in on the idea of Eretz/Medinat Yisrael. Our children need to hear our voices express how important Israel is the the continued health of the Jewish people, just as we heard it from our parents.

My sixteen year old son just returned from a semester outside of Jerusalem. He reminds me of when the fire of Israel came alive for me at his age. He gets his connection to the Jewish people and to Eretz Yisrael. As he told me his teacher Shira explained: "Guys, this is a learned Jew kind of thing."

The Jewishness of the Jewish state? Guys, this is a learned Jew kind of thing.
Posted by Ira J. Wise at 9:29 AM 1 comments
Labels: Israel, Makom, Peace, Racism, Robbi Gringrass, Zionism Links to this post

How can I help the multitudes of people in need?

This is a guest posting from Mazon, in support of part of Zemanta’s “Blogging For a Cause” campaign to raise awareness and funds for worthy causes that bloggers care about.

Los Angeles is full of wealth & opportunity, yet I see people in need everyday. A shoeless man walks the Sunset Strip; a teenage runaway sits with his dog on Santa Monica’s Promenade; a veteran asks for money and food on the median in front of the gates of Bel Air; and countless faces push shopping carts on the outskirts of Downtown’s Skid Row.

These are the faces I don’t forget as I navigate our city’s congested streets. Their untold story lingers in my mind for miles and miles. I wonder where their family is and how they’ve ended up in their current situation. My mind always circles back to the same question:

How can I, one person, help the multitudes of people in need?

Last night I found part of the answer in a grocery store parking lot. A mother and daughter (not dissimilar to any other pair walking in and out of the store) asked for help and I offered to buy them food. They didn’t ask for much, just bread and milk. I’m lucky to have extra money in my grocery budget so that I was able to help them in this small way.

I went home feeling as if I could have done more, and I will do more by donating to a cause that helps the people in my community. This is where MAZON and local organizations come into play- they have the expertise, resources and scope to help people beyond a few meals.

This blog post is part of Zemanta's "Blogging For a Cause" campaign to raise awareness and funds for worthy causes that bloggers care about.
Posted by Ira J. Wise at 6:51 PM 0 comments
Links to this post